The Ghoul Next Door (Paperback) 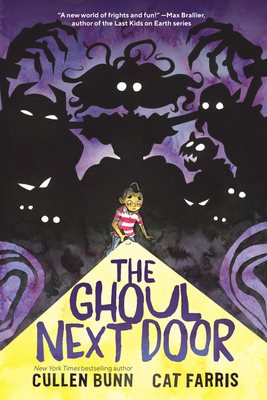 “Wonderfully creepy and macabre in the best Tim Burton-esque way. When Grey’s school project is stolen in the most unsettling way, he begins to feel like he’s being watched and followed. For fans of Gaiman’s The Graveyard Book, and the graphic novel, Beetle & the Hollowbones!”
— Rebecca Waesch, Joseph-Beth Booksellers, Cincinnati, OH

“A thoroughly charming story of friendship, sweet and funny and haunting all in equal measure.” —Tony Cliff, creator of the Delilah Dirk series

“Imaginative with the right number of chills.”—Booklist

Eleven-year-old Grey lives in the legend-haunted New England town of Ander’s Landing, and he can’t help but feel like a pair of eyes is watching his every move.

He discovers odd, gruesome bits and pieces from the graveyard that are left for him as gifts like art carved from bones or jewelry made from (hopefully not human) remains. Soon Grey is caught up in something bigger than he could ever have imagined.

He finds himself drawn into a strange mystery involving a race of reclusive subterranean creatures—ghouls, the eaters of the dead! Turns out, his secret admirer is a ghoul named Lavinia. An unlikely friendship forms between them. The only problem is, their friendship breaks traditions—and the punishment is a fate worse than death.

Cullen Bunn is the New York Times bestselling writer of the Sixth Gun, Harrow County, Bone Parish, and Dark Ark series; Bunn has written for Marvel, DC, Valiant, and many others. Bunn considers himself a lucky husband and father, and was once the world’s youngest hypnotist. His website is www.cullenbunn.com.

Cat Farris is a native Portlander, an artist, and pretty sure she’s just making this up as she goes along. She is supported in this venture by the world’s most beautiful husband, the laziest greyhound, and an all-star cast of Helioscope studiomates. She has done art for various comics publishers, including Oni Press, Dark Horse Comics, and IDW Publishing. You can see more of her work at www.cattifer.com.

“Imaginative with the right number of chills.” — Booklist